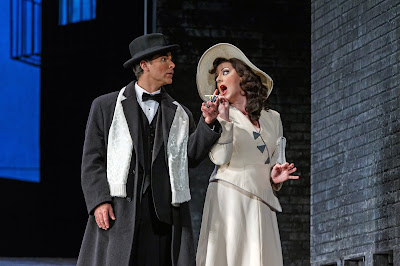 Pittsburgh Opera jump started the 2019-2020 season with  Mozart’s classic Italian opera  Don Giovanni and paired the season opener with the roll out of its new live mobile app, Live Note.  The opera encouraged the audience to enhance the opera experience by using  earbuds connected to a smart phone and receive commentary during the performance.  My app experience was just “menza menza” when linked with Don Giovanni, which was a high energy easy to follow show filled with Mozart's spectacular compositions.  Don Giovanni was so “perfecto” that it did not seem to need mobile app enhancement.

The Show
The show is based on the legends of Don Juan. Many stories have been written about the Don, the notorious womanizer. This opera  told the tail of this famous seducer of ladies with a mixed bag of humor and drama. 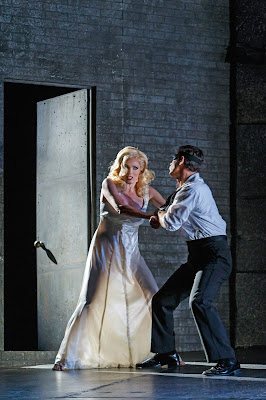 The opera opened with Don Giovanni (Craig Verm) attacking Donna Anna (Rachelle Durkin)  and killing her father, Commendatore (Brian Kontes) when he rushed to his daughter’s aid. Of course this fuels  Donna and her fiancé, Don Ottavio (Kang Wang)  to seek revenge for her father’s death.

Don Giovanni, a man absent of morals, even tries to seduce a young women, Zerlina (Antonia Botti-Lodovico) during the celebration of her upcoming wedding to Masetto (Tyler Zimmerman).  Thus, Masetto is not a fan of the Don.


Don Giovanni’s servant, Leporello (Musa Ngqungwana) is required to keep a list of  the Don’s  conquests. Early in the Act 1, we hear a powerful base as Ngqungwana  moans about working for the Don. The Don (Verm) is not only a wonderful base-baritone but exudes the charisma of a womanizer.   Verm and Ngqungwana  had great chemistry  injecting spurts of levity during the opera.  The jolted  Donna Elvira (Corrie Stallings) enters several scenes to proclaim waves of  affection or anger directed towards the Don. Stallings, a powerful soprano, displays a little of that “fatal attraction” action in the opera which adds even more humor.

Of course, Don Giovanni  ends in tragedy when he  ignores his opportunities to repent. His pride and sins ultimately lead to his demise.

Mozart's 1787 opera was given a face-lift in this production.  Don Giovanni owned a night club which gave the opera its “gangster flair.” The set and costumes were black and white in the 1950’s style like  an old Hollywood film. The whole production brought to mind a similarity to the look of movies like  Casablanca. I could just see the Don saying "hear's looking at you kid." 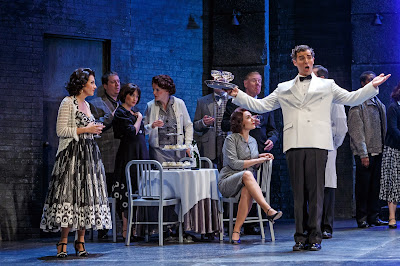 I could see why  Don Giovanni has been regarded by many as one of the  greatest operas of all time. From the start, Mozart’s overture was whimsical and light and the conductor (Glenn Lewis) seemed to be as animated as the music.  Every aria in the opera bounced even  when the character lamented over an issue. Every character seemed to have a  vocal moment or maybe every aria was just so beautiful, I am not sure, but  I was on a musical high after the show. 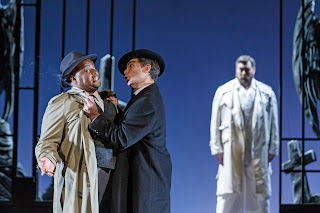 I admit that I planed to leave during intermission when I learned  that  the first act was 1.5 hours long and the second act was 1 hour. The  first act  moved as fast as a movie reel without producing one yawn on my part. As I walked to my car, I overheard two women giving the show many accolades saying, “This was the best opera I ever saw. I loved the way they made it modern."

The Live Note App
You are getting the picture that this was one good show and I am not sure that it was elevated higher with the help of the live commentary.  I started to use the app in the “Director’s Track”  which  started to gave information  about  film style, lighting and something called “Film Noir” a type of film drama of 1940’s and 1950’s.  I was confused because this seemed to have nothing to do with opera.  I finally caught on that  these clues were about the set and the reasons for the set choices.  Once I understood, I found some of the information interesting but the commentary seemed to distract from the music. I unplugged the sound but continued to glance down and read.

I then tried the app’s “Insider Track” which seemed to relate more facts about the music. It gave prompts to listen for the changes in tempo, some history of Mozart’s musical styles and pointed out trivia about the score. I preferred this type of  commentary however I was not familiar with some of the opera terminology so I had to read it several times (I guess I needed the watered down layman version).

There were times when the  app added a little  extra “insider” understanding but this fast pasted, easy to follow opera filled with such beautiful music did not need a boost with this new tool. I think that the commentary has potential to be an asset for other operas but this night my app experience was just “mensa  mensa” (so/so) because Mozart’s opera and Pittsburgh’s production of Don Giovanni was so "perfecto” that it was better to just listen.