Alcina, written by George Frederic Handel is a classic Baroque opera sung in Italian. It tells the tale of the sorceress, Alcina, who uses her power to seduce men and then she turns them into objects or animals. Pittsburgh Opera mixed period and modern costumes, injected Medieval Alchemical element symbolism and framed the set in armor, in their first ever production of Alcina. The classic Baroque vocal style (elaborate ornamentation of a vocal melody or coloratura) was accompanied by Chatham Baroque, a company that preforms 17th and 18th century music on period instruments. It was a night that masterfully embellished this Baroque masterpiece.

Refection
Although sung in Italian, the English subtitles made it possible to follow this tale of bewitched love and heartache. Alcina, a malicious sorceress, allures men to her magical island that she shares with her sister Morgana (Natasha Wilson ) and her sister’s lover, Oronte. Alcina (Caitlin Gotimer) usually plays with her men then tosses them away but she is especially smitten with her current catch, the knight, Ruggiero (Antonia Botti-Lodovico). I guess you could say that she has fallen “head over heels” for Ruggiero.
Ruggiero’s fiancé Bradamante (Laural Semerdjian) disguised as a man, and her tutor, Melisso (Tyler Zimmerman)  set out to free Ruggiero. The love triangle ensues when Morgana falls for Bradamante (in her male persona) and her jealous lover, Oronte (Angel Romero) stirs up the pot.

Eventually, Ruggiero comes to his senses and reunites with Bradamante. The rejected Alcina suffers  a broken heart and she meets her demise when Ruggiero destroys the source of her power.  Like many operas, we get a love triangle and a dramatic tragic ending.
Alcina is an opportunity to experience all things “Baroque.” The music had a distinct sound with the use of 17th century period instruments the: harpsicord (akin to a piano) viola de gamba (similar to a cello but with 6 strings instead of 4) and theorbo (resembling a guitar with 16 strings and a long neck).  The sound was harmonic, whimsical and seemed to bounce just like the singing.

Baroque vocal style (coloratura) uses fast paced repetitive phrases and the melodies seem to jump and fluctuate.  Every character seemed to have a beautifully sung moment where they used this ornamentation of the melody. They all preformed vocals that seemed to race up hills and down valleys. I enjoyed this Baroque technique because it was spunky and the energetic flexibility of the melodies seemed to make the song dance. 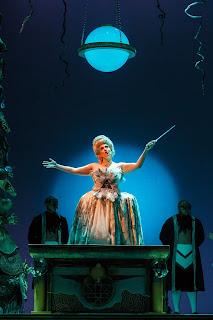 There was a lot of fun things going on in this production. The set was framed with pillars of gold armor representing the past knights that had succumb to Alcina’s power. The focal point of the stage was  Alcina’s altar where she constructed her potions. An inventive addition was the assignment of  alchemical element symbols to each of the characters: air (Alcina), fire (Ruggiero), water (Morgana) and earth (Oronto). These symbols were creatively woven into the costumes that mixed period dress with a modern flair. 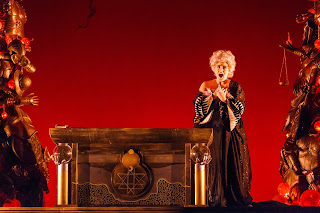 I recommend using the Pittsburgh Opera’s mobile phone app that gives live commentary during the performance through ear buds. It  heightened the “Baroque experience” by providing information on the period instruments, set choices and this early historical  musical style.

This production of Alcina is a unique operatic experience. It’s a masterful embellishment of this 17th century  Baroque masterpiece.

Spiritual Reflection
The Lord is near the brokenhearted and saves the crushed in spirit (Psalm 34:18)