I have seen several  operas, some  modern (Day 212) and some classical (Day 143), but they have all been larger than life productions. What I love about the opera  is that it is not really about the story but about the way the set, voices, and symphony  combust  to produce the overall "operatic experience."  The best way to describe Puccini’s "Tosca" was a powerful  vocal and musical explosion!


Reflection
I  have always enjoyed the  sound  of  Italian which is the language  sung in "Tosca" but thanks to the subtitles, this Italian girl did  not have to  rely on her  limited ability to understand it.  This story is set in Rome during the 1800’s. It  involves an intense romance between a heroic painter, Mario Cavaradossi  ( Thiago Arancam ), and an opera diva, Floria Tosca (Leah Crocetto) and the politics of  a  Roman police chief, Baron Scarpia (Mark Delavan), the villain.

“Tosca” is a three act opera and I enjoyed each act for a different musical reason. Act I opened with the escaped political prisoner, Casare Angelotti (Andy Berry) taking refuge in the  Attavani Chapel.  Mario, who is  painting a portrait of the Madonna (you must have a Madonna  in anything Italian), discovers Angelotti. Mario a loyal friend, pledges  to help hide Angelotti. Thus, he is the handsome hero.

The first act had a lightheartedness expressed  in the singing and in Puccini’s music. We quickly  discover the  beautiful  tone  of  the tenor,  Arancam as Mario,  and  the amazing  power of the soprano, Crocetto as  Tosca, as they playfully  flirt with each other  in front of the Madonna.  The passionate  but  jealous  Tosca repeatedly  instructs Mario to change the portraits eye color to brown.  She wants to remain  his “"Brown Eyed Girl". (I can be a fan of  both Van Morrison and  the opera.)

Mario sang  about Tosca's brown eyes and how he longingly melted into them. Yes, for a minute he was singing to me and yes, I  thought, how wonderful it would be for someone to  feel that way about my brown eyes. That is what a good opera does, it  makes you absorb  the feelings produced through the passion of the music!

In Act Two,  Mario (a tenor), Tosca (a soprano) and Scarpia (a baritone),  unleashed the strength of their vocals.  Scarpia arrested Mario  in an effort to  find the escaped prisoner  and used Mario  as leverage to force Tosca to succumb to his advances. Delavan as Scarpia, is the perfect villain that you love to hate. He finds  sadistic pleasure in  Tosca's agony  as he tortures her lover.

Tosca released  her powerful  soprano vocals  as she pleads for  Mario’s  life and  struggles with  having to  spend a  night with  Scarpia in order to save Mario’s  life. Her  voice filled the theater even as she was practically  lying on the floor.  Her sound  was  unbelievable!


A tormented Tosca agrees to Scarpia’s  proposition which results in Scarpia agreeing to arrange a mock execution  of her lover. He also writes a document that gives Mario his freedom.  Just as Scarpia makes his physical move, Tosca stabs him. She flees with the document leaving the murdered Scarpia with a crucifix on his chest.  As you can see, the intense drama in this act parallels the amplified vocals.


In the beginning of  Act III,  the orchestra played Puccini’s musical score without song.  We listened to this magnificent music as  the guard paced the castle wall  before the execution  and Mario prepared his last love letter to Tosca.

Initially, Tosca was so joyful in Act III when  she reunited with Mario. She tells  him about the plan and  gives him instruction on how to convincingly  fake his death.  Of course Scarpa betrays Tosca and the firing squad kills Mario.

Her joy quickly transformed  into deep grief.  She ends her life as the Roman solders come to arrest her for Scarpia’s murder by jumping off the wall crying,  “Oh Scarpia, we meet before God!”

Pittsburgh Opera's "Tosca"  was an igniting musical experience in so many different ways.  I say, don’t  miss this classic (shows October 7, 10, 13, 15).  I can’t wait to see the next one, Mozart’s “Marriage of Figaro” 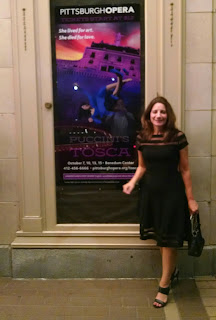 Spirituals Refection
Let him kiss me with the kisses of his mouth-for your love is more delightful than wine. (Song of Solomon 1:2).

Like an apple tree among the trees of the forest is my beloved among the young men. I delight to sit in his shade, and his fruit is sweet to my taste (Song of Solomon 2:3)